In 2017 TAGALONG PWDs have started bragging on our work:

•  Antonio,TAGALONG'S Super Midas Touch CGC AWD was WD and BOW at the Mattaponi Kennel Club on Saturday, May 20.  We had fun showing in the BBE class .

•   Antonio, TAGALONG'S Super Midas Touch CGC AWD was WD and BOS  in Harrisonburg, VA on Sunday, March 12.  We had fun showing in Owner Handler too.    Only 12 points to go.

•   Savoy will soon be CH TAGALONG'S  HIGH TEA for TWO CD RE MX  AXJ NF CGC WWD GROM as she earned her Masters Standard title in Reva, VA at the Charlottesville-Albermarle trial on Sunday, March 5.  This is our first Masters Agility title.

•    Sabato earned an Open Jumpers Q and first place in Reva, VA on Sunday, March 5. Way to go and now we need one more for an Open title to move to the Excellent level.

•    Antonio, TAGALONG'S Super Midas Touch CGC AWD is having fun in the show ring and was WD for a point in Fredericksburg, VA on Sunday, January  15 and BOW at  Howard County on Sunday, February 19.  Looking forward to  some fun in the conformation ring in 2017.  Only 13 points to go.

In 2016 TAGALONG PWDs have a few brags from our work in Water, Conformation, Agility, Obedience and Rally:

•    Savoy, CH TAGALONG's High Tea for Two CD RE AX AXJ NF CGC WWD and Siena,  CH AVIATOR'S PEANUT GALLERY CD RA OA NAJ CGC CWD  both received their Gold Registers of Merit (GROM)  at the PWDCA National Specialty this year.  So proud of my first two PWDs and all they have taught me.

•    Savoy, CH TAGALONG's High Tea for Two CD RE AX AXJ NF CGC WWD ended her Agility year with a 3rd place in Masters Jumpers for a total of 4 Masters Jumpers Q's this year and earned two Masters Standard Q's at the ODTC the previous weekend and  now has 9 Masters Standard Q's.  Oh so close to that first Masters ttile for us.  Gotta keep working towards our goal.  We are so happy to train and compete and always learn something new.

•    Charlie owned and trained by Cindy Miner is  now CH TAGALONG'S Holiday Gift from Logan NA NAJ AWD  after earning  first place ribbons in Novice Jumpers and Novice Standard with Cindy on December 11, 2016 at the ODTC Agility Trial.  What great teamwork.  They have been training  hard.

•    Galley owned and trained by Cindy Miner is  now CH TAGALONG'S Starry Night CD BN RN CGC after earning a first place ribbon and her Novice Obedience title with Cindy on September 24, 2016.  What great teamwork.  They have been working hard.

•    Antonio,  is now TAGALONG'S Super Midas Touch CGC AWD after  earning his Canine Good Citizen on July 10 at the National Capital Kennel Club CGC test  and his Aprentice Water Dog Title on Saturday, August 13 at the Keystone PWDC water trial. Very proud of  Antonio who is a smart and focused young dog.

•    Sabato, CH TAGALONG's ROMAN HOLIDAY, BN, CD, RE, NA, NAJ, CGC, AWD qualified with a 1st place in Open Standard on July 23  to earn his first leg  with another  masterful performance across the dogwalk.  He also had a 1st place in Novice B Fast.

•    Savoy, CH TAGALONG's High Tea for Two CD RA AX AXJ NF CGC WWD  earned her RE title and 3rd place and first RAE leg in the rain  at wet grass in the early morning at Mattaponi  on Sunday, May 22, 2016. Proud of my working girly Savoy.

•    Maji  earned her NAJ in March and is now  CH TAGALONG's  Holiday Wonder Girl OA NAJ.  She is loved and  trained by Judy Allen and Jim.

•    Sabato, CH TAGALONG's ROMAN HOLIDAY, BN, CD, RE, NAJ, CGC, AWD qualified with a first place on Sunday, May 1, 2016 to earn his his third Novice Standard Aglity leg and title  with a masterful performance across the dogwalk.

•    Antonio, TAGALONG'S Super Midas Touch had fun at the DelMarVa Supported Entry on Saturday, April 30, 2016 showing in BBE with a first place and then receiving a BBE Group 3rd placement.  We are going to have fun showing in 2017 - such a sweet flashy smooth moving boy.

•    Savoy, CH TAGALONG's HIGH TEA FOR TWO,CD,RA,AX,AXJ,NF,CGC WWD SROM  is loving Rally and earned two great scores in Rally Excellent B at the Maryland Sporting Dogs Association on March 5th and 6th. Savoy scored a 99 on Saturday for second place and qualified on Sunday with a 91.

•    Galley, CH TAGALONG's STARRY NIGHT BN, RA, CGC qualified with a 3rd place for her first Novice A leg on Saturday, February 27th in Salisbury, MD and once again with a 3rd place on Saturday, March 5th at the Maryland Sporting Dogs Association.  Way to go Cindy and Galley earning those first two Novice legs - what a TEAM!

•    Sabato, CH TAGALONG'S ROMAN HOLIDAY BN RE CGC AWD, qualified for second place in his Novice Standard Agility run at the PWDCA National Specialty in Frankenmuth, MI on Wednesday, August 5th.  We have been working hard for this Q and hope it will be the first of many.

•    Sabato, CH TAGALONG'S ROMAN HOLIDAY BN RA CGC AWD,  had fun the last weekend of May with two Rally Excellent third place runs with scores of 96 and 90, and as the only PWD entry in breed getting both his New Title for RE and BOB rosettes. He competed in Owner Handler and regular group too at Shawnee Kennel Club shows. He can do it all with great enthusiasm.

•    TAGALONG'S STARRY NIGHT BN CGC " Galieo -Galley" earned her third major and Ch with all points from the BBE class on March 14th at the Celtic Classic.  So much fun to show her.  Thanks Cindy Miner for your co-ownership and sharing Galley for conformation with me.

•    TAGALONG'S STAR SON OF SAND SAILOR is a new Champion.  He earned his first 11 points and one major from the BBE class, and final points and second major from the Open class on 2/1 at the Boardwalk Kennel Club expertly handled by professional handler Ernesto Lara for two weekends of shows.

•    TAGALONG'S HOLIDAY WONDER GIRL "Maji" and owner Judy Allen began competing in Agility and have earned their Novice Jumpers title and two  Novice Standard legs.  This is a great accomplishment for their first time competing.  They are fortunate to train at Bon-Clyde.

•    TAGALONG'S STARRY NIGHT CGC "Galley" and owner Cindy Miner earned Galley's Obedience Beginner Novice title from the Beginner Novice A class with two first place and fourth place finishes.  They have been working since Galley was a pup in a number of classes and it is paying off.

•    TAGALONG'S STARRY NIGHT CGC "Galley"  had a big win with me at the DelMarVa Supported entry as we went  Best of Winners for a Major win at our Supported entry in November.  Galley earned two majors and a total of 13 points in 2014 all out f the Bred By Exhibitor class. We will work to finish her Championship in 2015.  Galley has beauty and brains.

•    TAGALONG'S STAR SON OF SAND SAILOR "Bernardo" earned 11 points out of the Bred By Exhibitor class including one four point  major in 2014.

•    CH TAGALONG'S ROMAN HOLIDAY BN RN AWD CGC "Sabato" earned his Rally Advanced title and one Rally Excellent leg in 2014. He is training for agility and Novice obedience and water too.

•    TAGALONG's foundation CH AVIATOR'S PEANUT GALLERY CD RA OA NAJ CGC CWD SROM "Siena" competed in the Veterans Class as a ten year old at the National Specialty and the Veteran's Parade; as well as Veterans classes and the Veteran Agility run.  I am fortunate to have Siena from Lorna Coloccia and Gale Kostas as my foundation for TAGALONG. 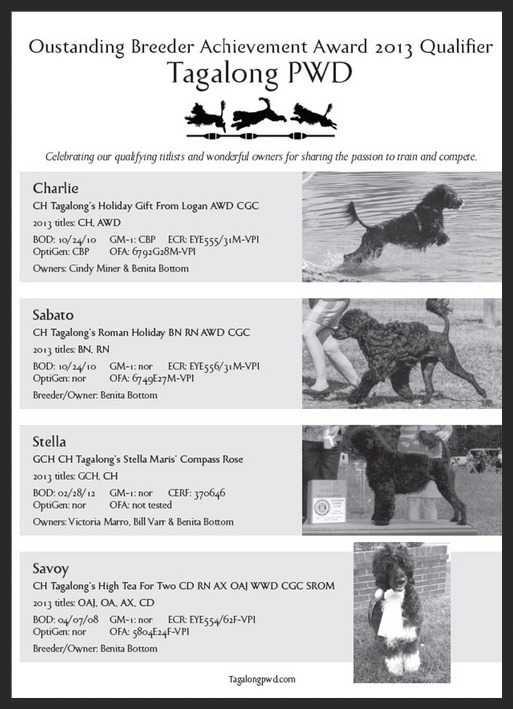 While many of our owners will never compete in any of these areas and trully desire a companion pet, I feel it is very important as a breeder to work with Portuguese Water Dogs and observe how they function in multiple venues.  What is their aptitude for learning and how well do they perform under stress?  Do they have the proper conformation to win in the show ring, to perform in agiity or jump off a boat?  In order to answer these questions and continue to promote the Portuguese Water Dog and its working heritage it is important to  me and TagAlong to breed dogs that can excel in multiple venues. To achieve these titles owners and handlers spend many hours training, conditioning and competing with their dogs. I love spending time with my dogs and training them and competing. I will only breed on occassion and match pedigrees for my breeding program with the goal  of always producing a better dog.

We are proud of all of our TagAlong PWDs and love to brag about their special accomplishments. 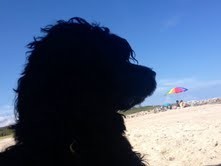 Sabato at the Beach 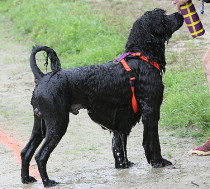 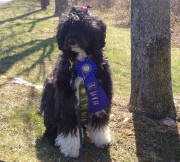